“The sunflower is mine, in a way.” ~Vincent Van GoghOberon Design... 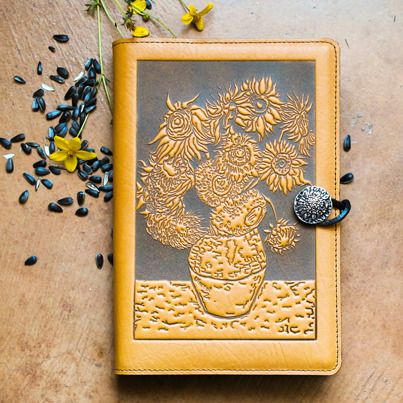 “The sunflower is mine, in a way.”  ~Vincent Van Gogh

Oberon Design is offering this archive special until June 30th, 2013. It was originally offered in 2007 in Catalog 12. Van Gogh’s Twelve Sunflowers is part of a series of sunflower paintings executed by Vincent in 1887-88 and the subject of a famous feud between Van Gogh and the painter Paul Gauguin. Gauguin owned two of the original part of the series, sunflowers laid on their sides, painted in Paris in 1887. Vincent painted the sunflowers in vases in 1888, putting them in the spare room of his house where Gauguin, coming to visit in Arles, was to stay.  Gauguin later tried to claim one of the vase versions as payment for painting studies he had left behind in Arles, angering Vincent and playing a part in their disintegrating friendship. An interesting note, without the innovations in manufactured paint pigments in the 19th century, the vibrancy of the yellow many of Van Gogh’s paintings are famous for, would never have been possible.