Roof of Heaven This 18th century woodcut of a pilgrim and the... 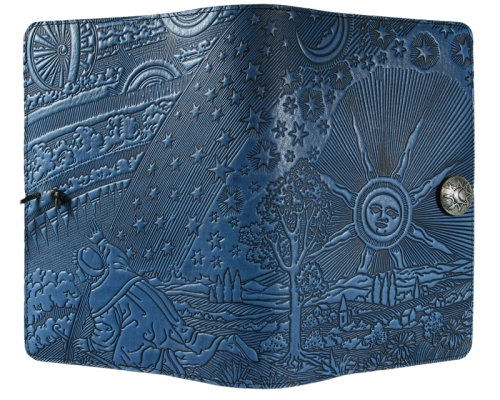 This 18th century woodcut of a pilgrim and the cosmos is taken from the French astronomer Camille Flammarion’s book, Atmosphere: Meterologie Populaire (Paris 1888). Flammarion, considered a genius, was known as an astronomer and prolific writer & lecturer on topics as wide ranging as climatology and solar cycles. Late in life he became interested in spiritualism and life on other planets. He believed that Mars had once been inhabited speculated that gas from Halley’s Comet could damage the Earth’s atmosphere.

A cult hero in France, his work remains of great interest to scientists, physicists and free thinkers. He wrote, “ The stars will continue to shine after the extinction of our sun, as they already shone before our existence. When there will no longer be on the earth a sole concern to contemplate, the constellations will reign again in the noise as they reigned before the appearance of man on this tiny globule. There are stars whose light shone some millions of years before we arrived … The luminous rays that we receive actually then departed from their bosom before the time of the appearance of man on the earth. The universe is so immense that it appears immutable, and that the duration of a planet such as that of the earth is only a chapter, less than that, a phrase, less still, only a word of the universe’s history."  For more on Flammarion visit these sites:  http://en.wikipedia.org/wiki/Camille_Flammarion