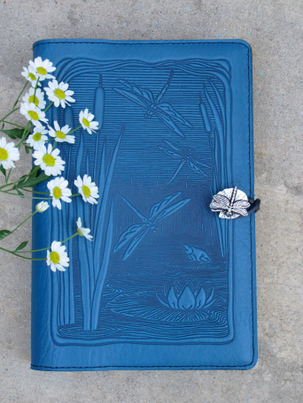 This original single panel image is available as an archive special on large and small journals through July. Call us to order: 866-462-3766

It made it’s first appearance in an early Oberon catalog in 1996.

Undoubtedly the dragonfly embodies positive forces across many cultures. It is believed that if you dream of a dragonfly landing on you, you are likely to receive good news. Featured extensively in Japanese art, the dragonfly signifies new light and joy, and is celebrated as a symbol of good luck and strength. It is the official national emblem of Japan, and Samurai warriors. The military nobility of medieval and early-modern Japan viewed the dragonfly as a sign of power, agility, and victory. For Native Americans the dragonfly suggests happiness, purity, and speed, and for the Chinese it symbolizes prosperity and harmony.