oberondesign:The Visionary: Vincent Van Gogh “I feel that there... 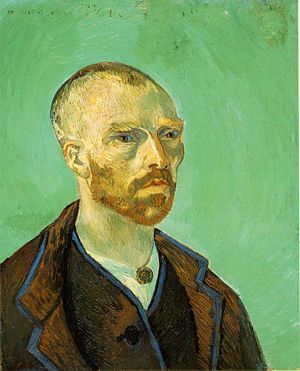 The Visionary: Vincent Van Gogh  “I feel that there is nothing more truly artistic than to love people.”

Dutchman Vincent Van Gogh (1853-1890} was a visionary Post-Impressionistpainter who suffered from mental illness. Van Gogh’s painting career began todevelop in earnest in his early thirties and ended with his death at age thirtyseven.  During this intense period, VanGogh’s painting technique began in the Dutch style, dark and brooding, moving to brighter, luminous colors greatly influenced by Japanese Ukiyo-e woodcut prints by Hiroshige, Hokusai, Eisen and others. He is known to have collected these prints in the hundreds from the docklands of Antwerp where Ukiyo-e woodcut images could be found in the form of Asian cargo packaging. The influence of Japanese art became a major source of inspiration for many European impressionist, Art Nouveau and Cubist artists culminating in a French style known as Japonisme. Arriving to study in Paris in 1886 Vincent was swept up in the artistic cafe life of Montmarte where he encountered others painters such as Millias, Cexanne, Degas, Gauguin and Pissarro, but conflict with this brother and patron Theo, addition to absinthe and dissipation drove him into the countryside near Arles France to improve his ill health.  It was there, between 1888-89 that he painted some of his greatest masterpieces.

Most of the final months of Van Gogh’s life were spent in a former monastery and hospital asylum in the town of Saint-Remy. It was here that he painted, through the barred window of his room, The Starry Night, his best known painting. On July 29th, 1890 Vincent Van Gogh died of infection caused by a self-inflicted gunshot wound. His final words were, “The sadness will last forever.” His paintings are some of the most expensive ever sold in the world. Self Portrait with Bandaged Ear, perhaps the most emblematic of Van Gogh’s alienation and despair, sold in the late 1990’s for an estimated $90 million dollars.

“I dream of painting and then I paint my dream.”

“For my part I know nothing with any certainty, but the sight of the stars makes me dream.”

“At present I absolutely want to paint a starry sky. It often seems to me that night is still more richly colored than the day; having hues of the most intense violets, blues and greens.

“Someday death will take us to another star.”

“ What is done in love is done well.”