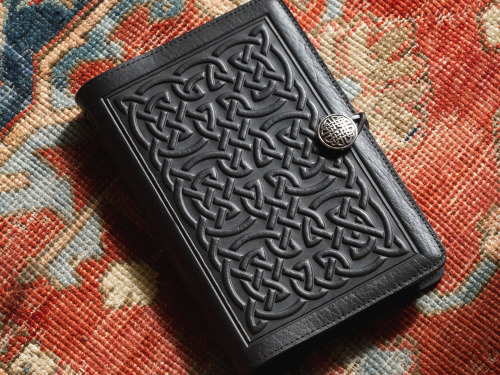 OBERON DESIGN’S USE OF CELTIC KNOTS
When Brendan Smith, founder and lead designer at Oberon Design, first starting making leather journal covers in 1992 he sought imagery from two aesthetic areas he was passionate about: Art Nouveau and, with a nod to his Scotch-Irish heritage, Celtic knot work.

For over a decade now Americans have been accustomed to seeing the knot patterns of ancient Celtic cultures on everything from jewelry to tablecloths, but in the early 1970’s, when Brendan first became aware of them, this art form hadn’t yet penetrated mainstream American culture.

At the time, Brendan was making leather vests with decorative Art Nouveau inspired appliqués with coin button and leather thong closures. To create large, round headed knots at the ends of the thong he began looking for books on knotting techniques at the library. His research led to the discovery of Celtic knots which have been incorporated into his work over 30 years. Knot designs are featured throughout the Oberon Design line on: iPad, Kindle and Nook cases, leather journals, handbags, smart phone wallets, and Oberon Design Britannia pewter jewelry.