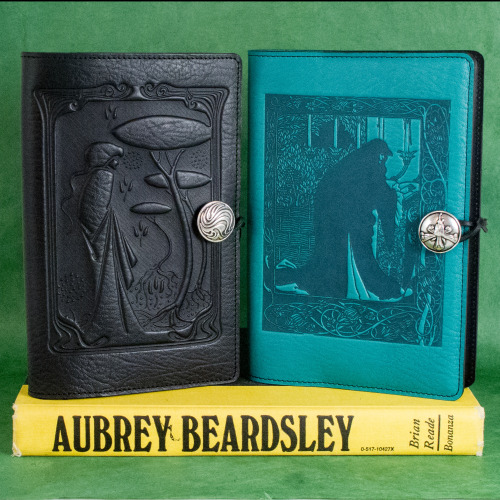 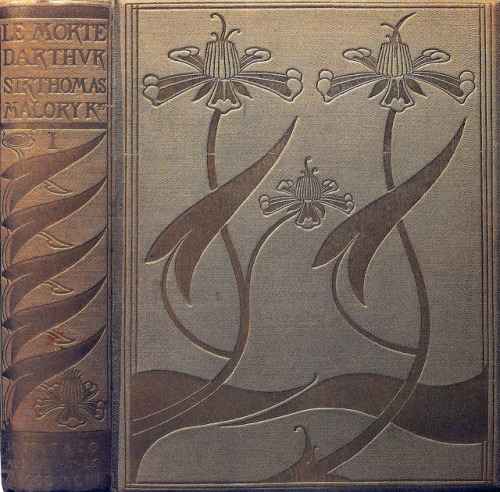 WHO IS SHE meant to represent? This Archive special offers two covers featuring illustrations of Aubrey Beardsley women taken from Le Morte D’arthur or The death of (King) Arthur by Thomas Malory. The teal cover depicts an illustration entitled, Queen Guenevere in Mourning. We chose our Beardsley Columbine Flower button for this cover as it depicts the flower design Beardsley used in the cover art of Les Morte D’arthur.
For many years the illustrated woman in the trees on our black cover was referred to at Oberon as ‘The Dreamer’ and assumed to be, and advertised it as a depiction of Guinevere http://en.wikipedia.org/wiki/Guinevere . However, in preparing for this Archive Special my research lead me to read up on all the illustrations Beardsley made for Le Morte D’arthur. Many of these identify Queen Guenevere but not ‘The Dreamer’ image. She is simply identified in our most comprehensive Beardsley tome, Aubrey Beardsley 1967 by Brian Reade, as a chapter heading illustration. She is not named only listed with a note….”The design is strikingly proto-art nouveau; but the boldness of conception and touch, and the occasional over-refinement of detail, as in the face, are Beardsley’s hallmarks.” She remains unidentified, despite my research. I found only one reference to this illustration that identified her as representing Isodle from Tristan and Isolde but was unable to verify this. Is she Guinevere or Isolde or will she remain, ‘The Dreamer? Let us know what you find out!  http://en.wikipedia.org/wiki/Tristan_and_Iseult

Aubrey Beardsley was born in 1872 and died of tuberculosis at the tender age of twenty-six. He was identified with the controversial and short lived English Aesthetic Movement which ended abruptly with the death of Beardsley and the imprisonment of the poet and playwright, Oscar Wilde. He was a major contributor to the poster art styles of the Art Nouveau movement and artists. Beardsley was heavily influenced by Japanese woodcut prints as was Van Gogh and many other artists of the period. Go here for a wonderful and exhaustive catalog of information and images for Aubrey Beardsley. http://poulwebb.blogspot.co.uk/2013/03/aubrey-beardsley-part-2.html