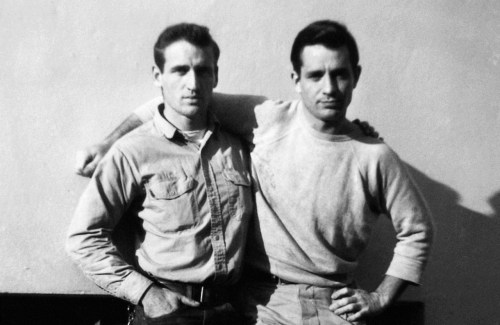 The roots of ‘beat’ poetry has it’s original origin in the 1940’s when the poet Kenneth Rexroth, dubbed, “the father of the beat poets” began his life long career as a writer. Rexroth is appears as the character Reinhold Cacoethes in Jack Kerouac’s novel The Dharma Bums. The references in Rexroth’s writing,  along with the poet Robert Duncan and others, to Ancient Greek, Japanese and Chinese poetry forms, jazz, politics, culture and ecology inspired a new generation of writers: Allen Ginsberg, Gary Snyder, Lawrence Ferlinghetti and Gregory Corso. Known as ‘The Beats’, this group also included poets, Lew Welch, Diane di Prima, Neal Cassady, Anne Waldman, and Michael McClure. Though Jack Kerouac and William S. Burroughs belong to the Beat group, they’re more remembered for their works of fiction rather than poetry. Other influences were Columbia University, where Kerouac, Ginsberg and Lucien Carr met, shared experience of petty crimes (Burroughs, Ginsberg) illicit drugs, crazy behavior, Dadaism and Greenwich Village culture where abstract expressionist artists such as Jackson Pollock and Willem de Kooning mixed with writers, jazz and folk musicians. The term, Beat generation is attributed to Jack Kerouac when used the term to describe his friends reality of being tired or beaten down by post war economy and society, but also upbeat or beatific new perceptions and finally a reference to jazz music and being, ‘on the beat.’