Celtic Knot Patterns No other artistic expression of interlocking... 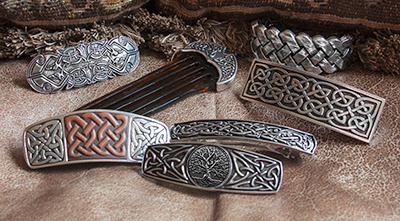 No other artistic expression of interlocking lines competes in complexity and imagination with the Celtic knot patterns of the period from the 7th to the 10th centuries. Knot work designs saturate ancient Celtic art in the form of illuminated manuscripts, carvings in stone and bone, jewelry and metal work.

The Celtic Revival of the 19th century extends to the present day, bringing with it a renewed appreciation of the Celtic interpretation of their art form as a representation of the inter-connectedness of life, the art of the unending line, symbolizing the process of regeneration and renewal.  The power of symmetry and mathematical precision, combined with the passionate, imaginative vision utilized by the Celts in the creation of three dimensional art forms, continue to resonant with art lovers and makers in the 21st century and beyond.

The specific meaning or direct symbolism of knot styles was lost during periods of suppression and assimilation. However, it is generally agreed that spiral themes are indicative of consciousness and balance, interlacing knots the unending cycle of life and death, and key or maze patterns the twists and turns of life’s journey. Zoomorphic knots depicting hounds or dogs represent loyalty; dragons symbolize rebirth and bird’s purity or nobility. Our best advice when choosing Celtic imagery is to use your intuition. Whichever knot you like best is the one for you!