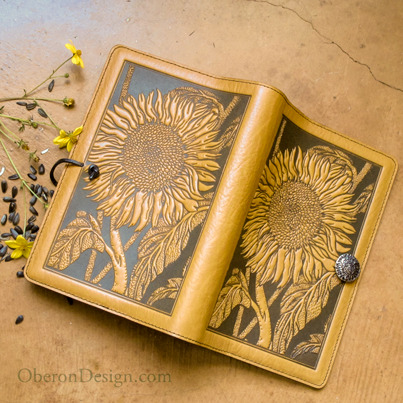 Vincent Van Gogh is associated with sunflowers which he loved. We first introduced our sunflower image in our 1995 catalog where it was a steadfast favorite for many years. We’ve had a number of requests for more flower designs and since we loved this one so much and now have the marigold color in our line, we decided to reintroduce an old favorite. Created for us by artist and lithographer, Davis TeSelle in 1995, we asked for a shaggy sunflower reflective of Vincent Van Gogh’s style. Let us know what you think. The image is available in Marigold, Saddle and Wine.

One of the most beloved and revered painters of all time, Vincent Van Gogh was during his short life an itinerant, unsuccessful artist who, beginning as a child, was over- zealous and passionate by nature. The son of a pastor, Van Gogh was fervently religious in his youth but his erratic behavior and sympathy with the poor alienated him from his father and social class. Van Gogh suffered all his life from a profound inability to communicate verbally or to comprehend ‘normal’ ways of relating to people. As an adult he suffered from ill health related to malnutrition, lead poisoning (from habitually holding paint laden brushes in his mouth) and excessive use of tobacco and absinthe.  It is also theorized that he suffered from epilepsy, chronic vertigo, bipolar disorders and frequent sunstroke. He never married but had an unusually symbiotic relationship with his brother Theo, thousands of their letters were preserved. All Vincent’s major breakdowns, including the severing of his ear, were precipitated by changes in Theo’s life, marriage and career. Vincent ended his own life in his 37th year and his brother Theo, a successful art dealer who devoted himself to Vincent’s financial and emotional support, died 6 months later of infection and grief.