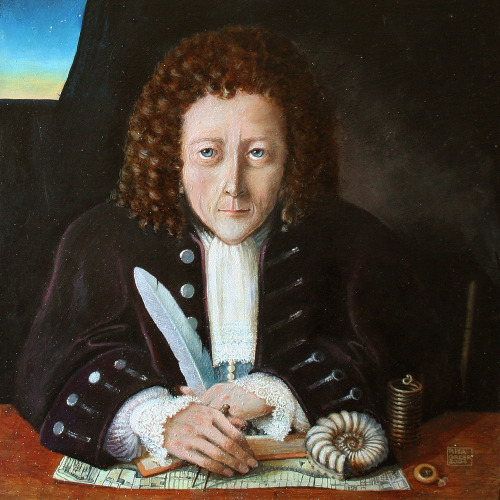 Not all explorers travel by ship or rail but take an inner journey into imagination.  Robert Hooke, born in England in 1635, was the son of a clergyman and was educated in mathematics and mechanics. By the age of 27, he became the Curator of Experiments of the Royal Society, a post he held for forty years. In his thirties Hook improved the pendulum clock and invented the balance spring in pocket watches, subsequently leading to what became known as Hooke’s Law. At the age of 30 he published Micrographia, Hooke’s treatise on the design and use of the microscope, very controversial at the time because microscopic observations led Hooke to be a proponent of biological evolution. Micrographia is considered one of the most important scientific books ever written because it allowed travel to  unknown worlds that exist on a microscopic level. The study of nanotechnology and quantum physics were directly inspired by Hooke’s work. It is Hooke’s that discovered and named the Cell or the building block of life. Known as London’s Leonardo (da Vinci) Hooke was also an important architect during the time of the Great Fire of London and after a life of ill paid work as a scientist became wealthy late in life. Other achievements of Hooke’s include building some of the earliest Gregorian telescopes, investigations of light refraction which led to his Wave Theory of Light, pioneering surveying and map making work that led to the first modern plan-form map, experiment in gravity that were later developed by Sir Issac Newton, the difference between venous and arterial blood, and deeply meaningful contributions in the field of paleontology, astronomy and the study of human memory. He could read and write in Latin, Hebrew and Greek and was considered a true polymath as his interests and achievements covered a wide variety of disciplines from astronomy, biology, architecture, paleontology, horology, and medicine. His contributions to the advancement of the human race are said to be immeasurable.